Many would look at Edmonton and say it has no defining architectural style, perhaps excluding the typical self-deprecating remark along the lines of “bland, Soviet-inspired, concrete monoliths.” Yet, Edmonton does indeed possess a standout architectural subset, and one that’s criminally undervalued; the Modernist church. Catholic. Lutheran. Anglican. Presbyterian. Go into any post-war community and you’ll find some beautifully experimental house of God, hellbent on pushing the architectural envelope. Surprisingly these fittingly humble buildings represent some of the city's best in design.

The swell in new church construction in the immediate post-war era was jointly brought about by the discovery of oil in Leduc, and by a change in philosophy at the City's planning department. The former reason is obvious; following the 1947 discovery the city was flush with both cash, new residents, returning veterans, and their new children — not surprisingly housing was popping up left right, and centre. But the latter reason is far more interesting.

Prior to the Second World War Edmonton’s streets were based upon uniform — or in some odd instances semi-uniform — street grids, as was common throughout North America. This pattern was uninterrupted well into the late-1940’s, thanks in part to new subdivisions still basing themselves off of pre-established grids which hadn’t been fully built out due to the 1913/14 real-estate crash. But, as these new-old communities were filled out, a thirty-five year old by the name of Noel Dant came to Edmonton. A Briton, Yale and Harvard graduate, Toronto Transit Commission subway station designer, and Chicago’s Senior Planner, he transferred to Edmonton in late 1949 as its first full-time Urban Planner, thanks to the lure of its potential. No sooner had he arrived had he begun to change the way the City approached the construction of new subdivisions.

As opposed to maintaining a tight street grid, Dant argued that communities should be more-or-less self-sufficient, allocating space for small, neighbourhood-focused strip malls, recreational spaces, schools, and community halls. As historian Lawrence Herzog describes, these designs “kept through-traffic away from the heart of the community, making the streets safer for pedestrians and reducing noise and air pollution. At the same time, the curvilinear street and laneway pattern was a more efficient use of land than the traditional grid pattern, but wasn’t so convoluted that visitors would get lost looking for an address. It also encouraged walking and social interaction.” As part of Dant’s approach to neighbourhood design space was also to be set aside for new churches. As his theories were implemented, and communities popped up like weeds a wave of new places of worship steadily followed.

At the time Edmonton was a hotbed for architectural design, and simple neighbourhood churches didn't escape the grasp of aspiring architects. They were designed by the province’s leading firms: Blakey & Blakey; Hemingway & Laubenthal; McKernan & Bouey; Stanley & Stanley; Wallbridge & Imrie; independents like John Macintosh, Joseph English, Eugene Olekshy, and Patrick Campbell-Hope. They were cutting edge in their construction: curtain walls; laminated beams; concrete blocks; unsupported ceilings. They were flamboyant in style: butterfly roofs; breeze blocks; geometric patterned stained glass windows; mosaic tile. They were as varied in style as they were in denomination: St. Augustine Anglican, described by the Journal as “like a ship;” Grace United, with its clean lines evocative of the works of Frank Lloyd Wright; St. Francis of Assisi Catholic, as modest as the community it dwells in; Mount Zion Lutheran, peaked like its namesake.

Dant’s neighbourhood planning proved successful — with even the American Society of Planning Officials heaping praise — and his modernist approach was matched by the churches that called his communities home, reflecting Edmonton’s transformation from a backwater into one of Canada’s major cities. Among the most standout are:

The buildings weren't only strict architectural expressions, however. Tai Ziola writes “the buildings in some ways created a new church experience, the Modernist style was also a device used by the church organizations themselves to create a renewed image of a less hierarchical and more welcoming institution. Offering new types of modern buildings for these growing communities, many church organizations effectively re-branded themselves into the secular look of the day and reached out to young families with modern attitudes.”


Unfortunately, many of Edmonton’s amazing mid-century churches are facing an uphill battle. Their congregations are aging and rapidly dwindling. Densification is occurring in many of the neighbourhoods they reside in. Continual maintenance is becoming a burden. To many they’re background noise, inoffensive and easily ignorable. They sit at the odd age where there far too old to be considered new, but too young to be considered historic.The City-maintained Inventory of Historic Resources has ignored most. And, perhaps, most damning of all, they’re built in a style the public at large is thoroughly uninterested in; International Modernism. How are they expected to survive if no one takes an interest in them? They lack the pretentious decoration, historicism, and apparent craftsmanship that people value in their Edwardian predecessors, which belays the fact that the unornamented, wide expanses, clean lines, earthy materials, tones, and shapes of their modern counterparts were an unprecedented breakthrough in both design and construction that’s had a lasting effect for generations.

Modernism, the criminally undervalued style that it is, made its foothold in Edmonton well known, and with the exception of Montreal, there is perhaps no city in Canada more clearly defined by it. Whether it’s accepted by the public or not, these unostentatious and clean churches are the city’s future heritage.

Popular posts from this blog 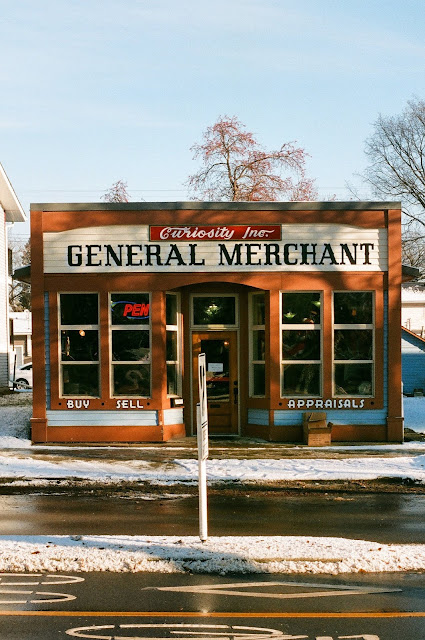 The streets of Edmonton became electrified on a cold night in late October, 1908; the Edmonton Radial Railway, the city’s new bastion of modernity — a streetcar network — hummed to life. When they entered into regular service on November 9th the creaking, screeching, deep green and gold trimmed coloured trams brought fast and reliable transit service to Edmonton’s many far flung communities. By the end of the year track had reached north to Alberta Avenue, cut south into the rival city of Strathcona, and made it as far west as the city’s boundary at 21 Street. Outside of ferrying clerks and office workers, and meatpackers and stablehands, the E.R.R. also served as a tool of development — wherever it went real-estate speculation and construction was bound to follow.
In the far Westend that’s just what happened. Only a few years prior the vast lands owned by pioneer Malcom Groat had been sold off, but they sat largely undeveloped. However, as the streetcar tumbled its way towards it, the…
Read more 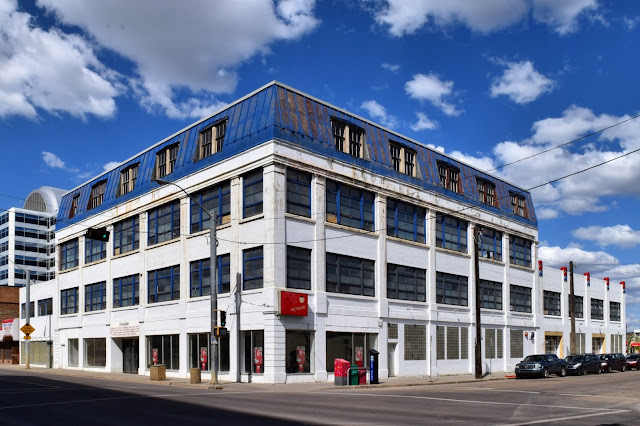 The tale of this impressively storied building starts with a local retailer by the name of Alexander Livingstone.
Livingstone was born in Bathgate, Scotland on August 2, 1884. At the mere age of 20, Alexander decided to emigrate to Canada upon the suggestion of a visiting Montreal curler, who extolled the virtues of “the wonders of the Canadian Northwest,” and central Alberta. However, as recalled in the January 16, 1914 issue of the Edmonton Daily Bulletin, when Livingstone arrived he “found that Edmonton, though possessed of a splendid site for a future city, then was comparatively a village, offering no opportunity for a store of the type he had in mind.” He would trek back to Winnipeg, where he gained employment as a draper, and would spend the next two years there as “the possibilities of the little town on the Saskatchewan haunted him.”
In 1906 Livingstone would finally return, and with only $150 in his pocket he established a small store — in name only, as it was more akin to a h…
Read more